Stilbaai’s Rots- en Strandkushengelklub (‘Rock and Shore Angling Club’) is hosting the annual Galjoen Derby for the 26th consecutive year and it takes place on Saturday, August 5th, in Stilbaai.
A total of 71 teams (six members per team) from all over South Africa have entered this year’s competition where it is about big prizes, but it is also very much about catching the biggest galjoen on the day. Anglers will now keep an eye on the sea and the weather and will hope that the sea will be ‘on’ (that it will not be too clear and with lots of foam) as these are the ideal conditions to catch this shy fish (Dichistius capensis) that is also South Africa’s National Fish.
The Galjoen Derby, this year called the Stilbaai Agio Baits Galjoen Derby, is not only the biggest angling derby in South Africa, but it is also the biggest catch and release event. Almost all the fish caught on the day are being tagged and safely released after it has been weighed and measured according to the rules of the competition. The anglers are, however, not only catching galjoen and the weight of other fish brought ashore, also count towards calculating the winning team while there is, of course, a prize for the biggest galjoen.
Stilbaai welcomes all the visitors and trust that this event will, once again, be a great success. Good luck to all the local anglers participating in this event.
For more information about the Stilbaai Agio Baits Galjoen Derby, visit www.stilbaaigaljoenderby.co.za or visit Stefan van Huyssteen at Stil Fishing in Stilbaai. 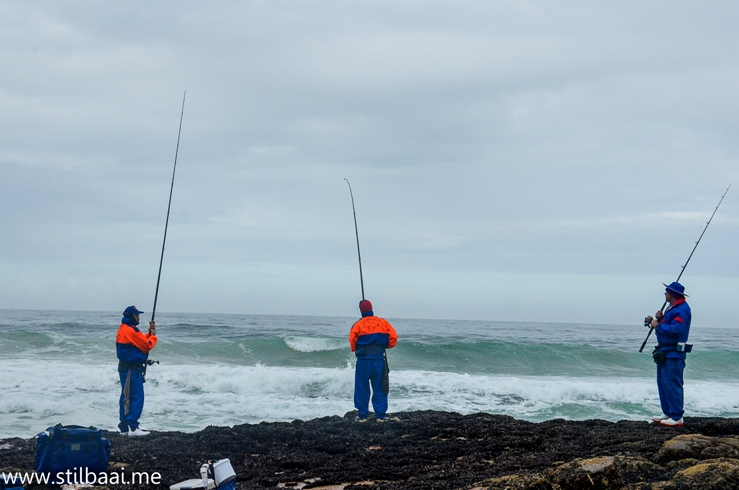 Participating anglers will try their luck on the shores from Stilbaai to Jongensfontein.