THE ‘WAFRA’ – A MONUMENT WITH A SAD STORY…

What is a coastal town, where fishing used to be one of the major forms of income and is still being practiced, without a historical fishing boat?
Yes, Stilbaai also has theirs and this is one of the things (places) you have to visit when in Stilbaai… Stop at the harbour and walk past the NSRI Station 31 building to the old fisherman’s boat (or a ‘tok‘ in Afrikaans) next to the building. This one has quite a sad history though…
History has it that when this ‘tok‘, the Wafra, a commercial fishing boat, left for the ocean on April 25, 2002, it was the very last time it did so. The boat and its crew of eight was caught in heavy mist and were stranded on the rocks at Skulpiesbaai close to the harbour. Six of the eight crew members lost their lives – Otto Galant (Pye), Henry Galant, Willie Olivier (Willie Keps), Otto Manho (Whitey), Franje Manho (Oom Faan) and Bob Abrahams drowned and Reginald Kleynhans from Melkhoutfontein as well as ‘Mario’ were the only two survivors.
According to an article in the Suid-Kaap Forum newspaper (dd June 7, 2012) between 35 and 40 fisherman’s boats returned to the harbour for the funeral on May 1st, 2002. The Wafra was later a well-known beacon next to the N2 at the turn-off to Stilbaai. It was replaced in 2011 by the current boat that is an extremely popular ‘photo stop’ for hundreds of holiday makers.
The Wafra was then restored and now serves as a monument.
(Information from Suid-Kaap Forum newspaper. More photos on mystilbaai.co.za on Facebook) 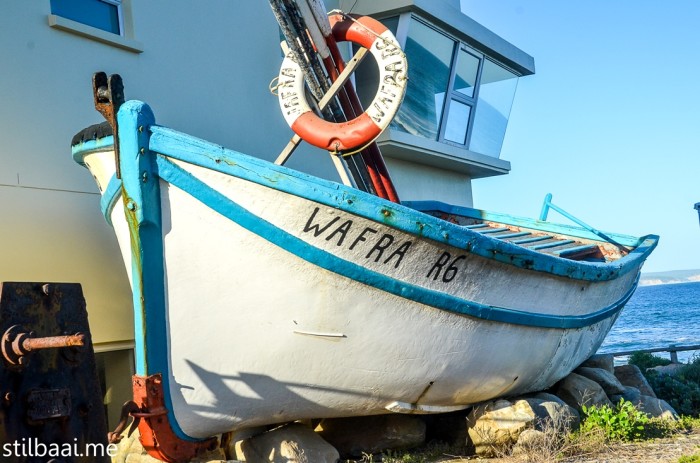 The ‘Wafra’, a fisherman’s boat with a (sad) story… (Photo: www.mystilbaai.co.za)