JOIN IN THE ‘STILBAAI COASTAL CLEAN-UP’ ON 17 SEPTEMBER!

This Saturday (17 September 2016) is International Coastal Clean-up Day, an action that was initiated and started by Ocean Conservancy 30 years ago (South African has been officially involved in this international project for 20 years) and Stilbaai will also get into action to contribute to cleaning its beautiful beaches.
in 1986 the single effort of a woman walking along a beach in Texas resulted in the initiation of International Coastal Clean-up Day. This project has since grown into the world’s biggest volunteer effort for ocean health and annually, on the third Saturday in September, more than 700 000 volunteers in 127 countries spend two hours of their time removing litter from beaches.
Living at the coast, we are all too aware of just how bad ocean pollution is and the figures look really bad. According to Two Oceans Aquarium in the Cape, the estimated amount of plastic trash floating on the surface of the ocean is 270 000 tonnes while the global plastic production doubles every decade! They also say that 90{c77536a3c8b7388df25a320e52eabfd15c4727735b5f43d291dcbeb9bd4d4a99} of sea birds have ingested plastic while 700 marine species are threatened by ocean plastics. Another source states that there are 46 000 individual pieces of plastic litter for every square mile of ocean.
On the southern coast of Africa, the beaches at Stilbaai and Jongensfontein, that include various Blue Flag Beaches, are known for being particularly clean, but the trash from inland as well as rubbish being spewed out by the ocean, unfortunately do still end up on our beaches. Plastic bottles and pieces of other plastic products are a common sight on the beaches. Luckily many residents are in the habit of picking up rubbish during their regular beach walks while the Hessequa Municipality is also playing an important role in keeping the beaches clean, especially during the summer holidays.
This Saturday, those interested in the Beach Cleanup at Stilbaai, can meet at 8:00 at the Community Hall where they will be issues with plastic bags and told where to clean up – www.mystilbaai.co.za will be there!
September is Arbor Month (see the previous article about Arbor Month in Stilbaai), but also the month where the focus is on cleaning up and recycling. This week (12 – 18 Sept) is Clean-up and Recycle Week SA while Recycling Day SA is on Friday, 16 Sept 2016. Find more information about this on www.cleanup-sa.co.za 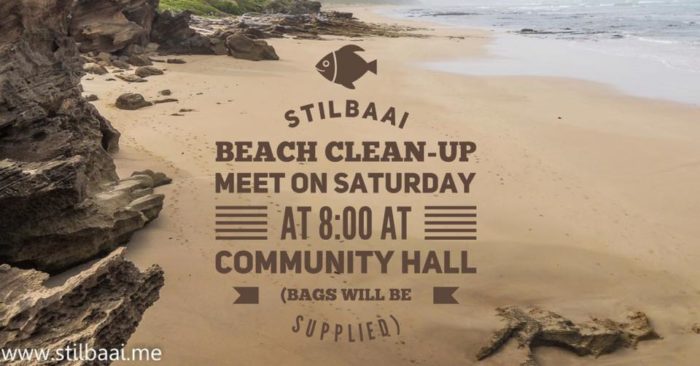