GET READY FOR THE GALJOEN DERBY AND VINTNERS SURF CLASSIC

Stilbaai might be a quiet little village on the south coast of South Africa, but it is well-known for a number of annual events that draw visitors from all over the country. These events include the gruelling 5-day Trans Agulhas Inflatable Boat Race that is taking place for the 29th time this year and stopping over in Stilbaai on 29 December and ‘Stilbaai Touchies’, the touch rugby competition that took place for the first time in 1979 and will be played for the 38th time this year on 26 December.
With the December holidays still a few months away, Stilbaai is getting ready for the 25th annual Galjoen Derby that is taking place this long weekend (Saturday, 6 August) on the Stilbaai and Jongensfontein shores. This year, 68 teams (410 anglers) from all over SA and especially from the Eastern and Western Cape, will again compete by catching galjoen and big prizes can be won. The derby is being hosted by the Stilbaai Rots- en Strandkushengelklub and as it is a long weekend (school holiday on Monday and Women’s Day on Tuesday) the families are enjoying a little holiday in Stilbaai. The anglers will start casting at 7:00am on Saturday with no fishing after 4:00pm and with the current weather prediction for a sunny day, no rain and no strong winds for Saturday, it looks like anglers and their families are in for a great day in Stilbaai and Jongensfontein.
It is interesting to see that the organising club has made the decision to rather release fish than keeping it. This decision was made more than a decade ago and many anglers are now participating in this initiative (members of the Stilbaai Angling Club are known for catching and releasing). Fish are being marked and weighed according to the rules of the competition and this has resulted in the Galjoen Derby being the largest catch and release derby in the country.
For more information about the Galjoen Derby, visit www.stilbaaigaljoenderby.co.za 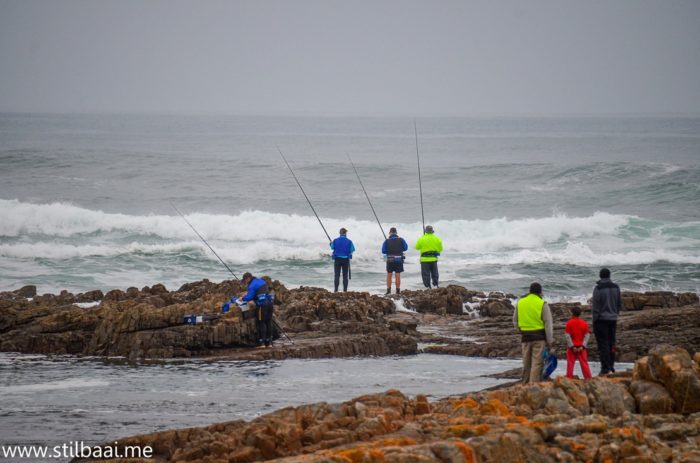 NEXT UP: Vintners Surf Classic on Friday, 12 August (the venue in Stilbaai or Jongensfontein will be announced on the day depending on the surf conditions).
The first Vintners Surf Classic took place in 2000 at Onrus Beach, but it was moved to Stilbaai as it has a more consistent point break. “Every year winemakers are invited by various suppliers in the wine industry to play a round of golf,” explains Sebastien Beaumont of Beaumont Wines on the event’s website, www.vintners.co.za. A few of the winemakers decided that it is unfair as they have to surf on weekends and came up with the idea of taking one Friday off a year to do what they love – surf!
Now the Vintners Surf Classic takes place once a year on a Friday in August when contestants – winemakers, viticulturists and marketers working for a winery – and their families enjoy a great day of surf and fun. “It is such a great day to hang out with fellow winemakers and share new ideas, catch up or just shoot the breeze out on the waves,” Sebastien said.
Competitors are being divided into three main categories: Junior, Senior and Ballies and at the end of the day, the prizes (surf boards or wetsuits etc) go into a lucky draw for all to have a fair chance of winning something.
So, we are holding thumbs for a great day for the surfers on Friday, 12 August as well. Visit www.vintners.co.za or their Facebook page (Vinter’s Surf Classic) for more information.
End