STILBAAI – A PARADISE FOR BIRD WATCHERS

About a year ago, 33 members of the Cape Bird Club visited Stilbaai for a three day camp and their bird watching adventure started at Botterkloof Resort situated about 5 kilometres outside Stilbaai next to the R305 that leads to the N2. They chose the self-catering option at this resort with its ponds and large trees and saw a Greater Honeyguide as well as an Olive Woodpecker, weavers and bishops, a host of wagtails, a Common Moorhen and even a Malachite Kingfisher as well as a Knysna Woodpecker before their camp started in all earnest.
In their report posted on their website www.capebirdclub.org.za the group describes where their convoy of nine vehicles drove and which birds they spotted. On the first day, their list included Brimstone, Cape, White throated and Yellow canaries, Brown-hooded, Giant and Pied Kingfishers, an African Spoonbill, Large-billed and Red-capped Larks, Olive Bush Shrike, Streaky-headed Seedeater, a Bar-throated Apalis and a Booted Eagle as well as an African Fish Eagle amongst many. They were however disappointed that the Black Cuckoo that was spotted just a week earlier, failed to appear.
It was quite windy when they got to the coast and they had no luck in seeing a Shy Albatross. They did manage to see a White-Chinned Petrel, oystercatchers, cormorants, terns and gulls and a Grey Plover and on their way back to their camp, they spotted a lone whimbrel and a common sandpiper.
On the second day they were off early again and in search for the Clapper Lark and they made several attempts to connect with it. At least a Denham’s Bustard show itself – they are apparently often seen too far from the road to notice all the markings – and it was ticked off. The group was really desperate for the sighting of the Clapper Lark and tried again to connect with it. In the meantime they saw a Zitting Cisticola as well as a Cape Robin Chat, Karoo Scrub Robins, Karoo Prinia, a Jacal Buzzard and Cape Bulbuls. They were surprised about the minimum amount of Larks and pipits on the ground, but saw an African Pipit. A Southern Black Korhaan was heard, but not seen…
At a bridge over the Gouritz River, they saw Saw-wings and swallows, some Horus swift, Pied Starlings and a Pied Kingfisher. They went back to the coast in their search for the Shy Albatros, but had no luck again, despite the presence of a trawler and had to settle for an Osprey that flew in and out of the waves. Looking at their list, they were pleased to have seen 146 birds in total.
Some members headed back the next day while others took on one of the shorter coastal hiking trails before visiting the museum at the Palinggat Homestead and watching the tame freshwater eels being fed. This group was lucky enough to have heard the call and then saw the elusive Knysna Warbler near the start of the trail that leads down to the river mouth.
Read about their bird watching experience on www.capebirdclub.org.za

Knysna Woodpecker
The Knysna woodpecker is endemic to South Africa, being found in woodlands and thickets along the southern coastline. It mainly forages in trees, searching dead branches for invertebrates and gleaning ants from branch and leaves. Both sexes excavate the nest, which is usually a hole in the underside of a branch, often reused over multiple breeding seasons. Here it lays 2-4 eggs, which are incubated for roughly 21-13 days (estimated). The chicks are fed by both parents, and stay in the nest for an estimated 25-27 days. (www.biodiversityexplorer.org)

Where to do birding in Stilbaai
Almost anywhere! There is also a bird hide just off the gravel road on the way to the Skulpiesbaai parking area; visit places like Botterkloof Resort (have a look at the list of birds spotted here) and Palinggat Homestead (Stilbaai Tourism and Information Centre where the freshwater eels are being fed daily). 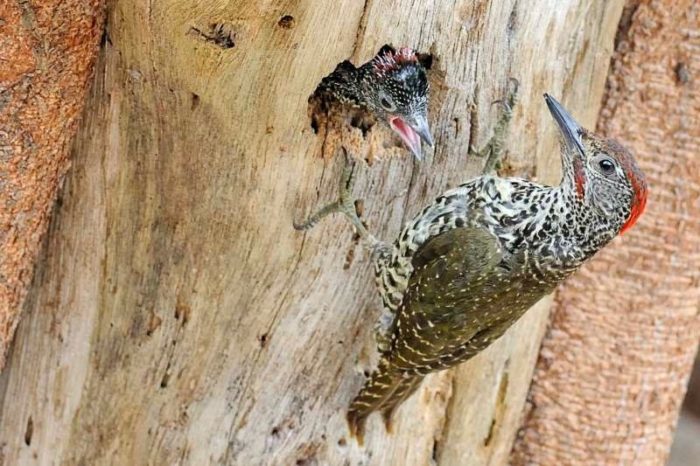