27th GALJOEN DERBY THE BIGGEST EVER

The 2018 Stilbaai Galjoen Derby, hosted by Stilbaai’s Rots- en Kushengel Klub (Rock and Coast Angling Club) for the 27th consecutive year, promises to be the biggest in the history of the event. This year’s event, that takes place on Saturday, 11 August in Stilbaai and Jongensfontein, will see a total of 456 anglers from 76 teams competing for prizes worth R160 000.
This competition is an important event for Stilbaai as it provides an annual economical boost for the town and it is being supported by various businesses. The derby is being sponsored by Agio Baits and Sinkers for the second consecutive year.
What makes this competition even more unique, is the fact that ALL the galjoen caught, is being safely released after it has been measured. Last year more than 150 galjoen were safely released again. Other fish caught also count towards the heaviest ‘bag’ per team and these fish are also being released. This makes the Stilbaai Galjoen Derby indeed the biggest catch and release angling event of its type in the country.
The event is strictly organised and monitored. On Saturday, anglers will start fishing from the area at the Stilbaai harbour towards Jongensfontein and not further than Heuningnesbaai. All lines have to be in at exactly 16:00 with the rest of the administration (scoring etc) being done at the Stilbaai Community Hall where the prizegiving will also take place.
This year the prize for the heaviest galjoen returned alive is a Shimano Stella 10k reel. If the winning galjoen is over 5kg, the angler will win the Stella as well as an additional R15 000 cash sponsored by Agio Baits and Sinkers, Stil Fishing Stilbaai and Zoo Look Fishing. Among the prizes are prizes for the 28 heaviest galjoen caught while the junior angler who has caught and released the heaviest galjoen, will win a prize of a lifetime. He (or she) and four friends will go on a deep sea fishing trip with Stilbaai’s Sprinbok angler, AJ de Beer on the boat, Savage Charters. Stilbaai’s Bertie Barnard Primary School has entered a team last year with their lady angler, Celena van Zyl, who finished in the overall top 10 last year with the galjoen she landed. This year there will be two teams from Bertie Barnard.
Perfect Attendance Register – that is what Coenie Jones, Dougie Kramer and André Manning have as this will be their 27th Galjoen Derby while René Cronje will be competing for the 26th time.
The Galjoen Derby Gives Back – each year, a huge bottle of wine is being auctioned off during the prizegiving and the money goes to the old age home, Huis Stilbaai. This year will be no different and the old age home will again benefit from this event.
For more information about the derby, visit www.stilbaaigaljoenderby.co.za and like the event on Facebook (Stilbaai Galjoen Derby)
View photos of the 2017 Galjoen Derby here. 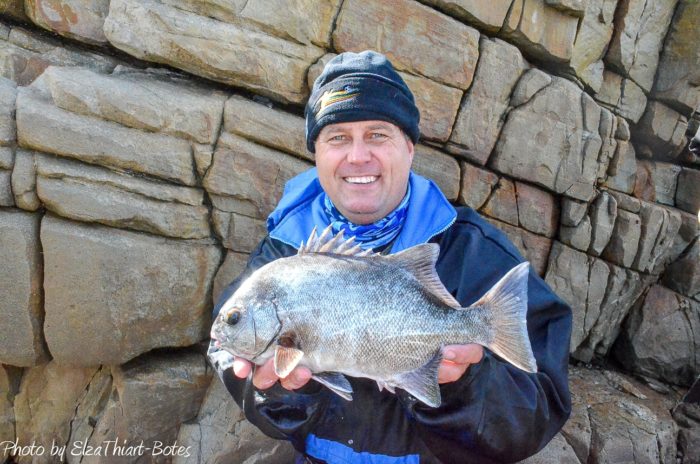