Stilbaai is not only a popular holiday destination, but it is also well-known among surfers as a surfing destination and advanced surfers prefer to tackle the waves especially at Morris Point. Here dolphins and even seals have joined surfers in the action.
Less experienced surfers prefer the softer breakers at Lappiesbaai while those with even more experience are regulars at the rough coast of Jongensfontein.
Here are the various surfing spots in Stilbaai and Jongensfontein according to www.wavescape.co.za, a South African surf forecasting and coastal lifestyle website that has been in existence since 1998. They also provide marine forecasts to the surf industry and the public and run the Wavescapes Surf Film Festival which screens the world’s best surfing and ocean conservation films.
Stilbaai – a grinding right-hand point break with a classic mid-break section, and sometimes a deep, thick outside section for the stout of heart. When big, a strong rip pushes you down the rocks. Like many points along the east coast, Stilbaai likes a lined-up south to southeast swell. A huge west or southwest swell bends around the outside point and reforms a lot smaller on the inside, with much of its energy broken up. As the swell angle moves to southeast, the swell comes in straighter, avoiding the outside reform. Best in glassy seas or light westerlies on a pushing mid tide in clean four- to eight-foot swell.
Dolfines Point – A gnarly, ledging right-hand point reef with some seriously hollow sections deep in wild fynbos. Needs a solid 10-foot-plus south swell before the swell wraps into the bay, or southeast swell of course. Needs light northwest to northeast wind. Only good surfers need apply.
Skulpiesbaai – In the middle of the bay across from Dolfines Point lies a small triangular reef with good right-handers in clean groundswell and light winds. On the eastern side of the bay, which is in effect the reverse side of Stilbaai Point, some good lefts break off the rocks. Best when a powerful five- to eight-foot southeast swell is running.

Jongensfontein – When you’re headed to Stilbaai in the mistaken belief that it will be firing, Jongens might appease you. Jongens prefers a two- to five-foot southwest to south swell, and breaks off a reef running right. The northwest to west wind is offshore, but it needs to be light.
Kakgat (Jongensfontein) – Triangular-shaped reef with right-handers peeling off the top of the reef, sometimes running up to a shore-break close-out. Prefers light west to northwest wind and clean three- to five-foot groundswell. Careful when pulling off the floater at the end. You might get a sand enema you won’t forget. On the scatological theme, Kakgat was named in the 1980s when former Springbok rugby player Rob Louw took a dump into an underground municipal sewage tank at the break. 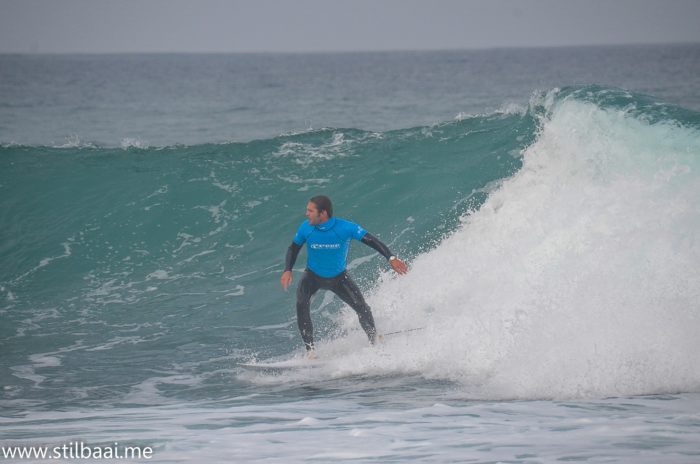 Ramyatoolies – A fast, powerful left-hander off some rocks further down the beach. It was first surfed in 1984 but the locals did not have a name for it. Then someone told a derogatory joke – which we decided not to publish. Please visit www.wavescape.co.za for the story… – but the name Ramyatoolies or ‘Toolies’ stuck.
According to www.wannasurf.com the normal length of the waves at Morris Point is 50 to 150 metres and on a good day, the length is 150m to 300 metres. The swell size starts working at 1.0m to 1.5m / 3ft to 5ft and holds up to 4m+ / 12ft. The best tide position is mid and high tide.
Says popular surfer and model, Roxy Louw, who enjoys holidays in Stilbaai with the family: “Whenever I paddle out in Stilbaai, I take a step into my childhood. I still get butterflies and a warm feeling out there. It’s one place I truly feel safe. One having surfed it for years and secondly that I have dived the whole reef and collected “allekrik” and fished the rocks as a child. I know every rip-tide, but it also holds close to my heart as my dad was one of the first guys to surf Stilbaai and named “Kakgat” after a boys trip. My ‘oupa’ Matt who recently passed at 94, was a fond body surfer and his ashes will be thrown into the surf following his wishes. He always called Stilbaai ‘heaven’ and us youngsters have come to have a slice of it too. I will forever spend endless surfs and also teach yoga over the holiday season there at the local health studio.”
Sufer and Kfm surf reporter, Deon Bing, about surfing in Stilbaai: “You’re a little surfer out there in a big ocean…”
The 18th Vintners Surf Classic took place at Stilbaai’s Point earlier in August and despite the wet weather, it was enjoyed by all the winemakers, the marketers, families and supporters.
De Kleine Wijn Koöp was at the event and produced this awesome video that shows spectacular waves and great surfing.